Why Not Solar Energy?


What are natural resources? Natural resources are materials and components that are found within the environment. They exist undisturbed by mankind and are essential for our survival. They are first classified on the basis of origin that are divided into two, the abiotic (non-living, non-organic) and biotic (living and organic). Another classification of resources is considering the stage of their development, natural resources may be referred to in the following, Potential, Actual, Reserve, and Stock. And lastly, resources are also classified as Renewable Resources, or Non-renewable Resources.

For this week I decided to research about renewable alternate energy resources. While in class I remembered about the solar powered inventions being tested and those being sold. There are cell phone chargers, calculators, lamps, and even cars that were made to function just by placing these items under the sun. 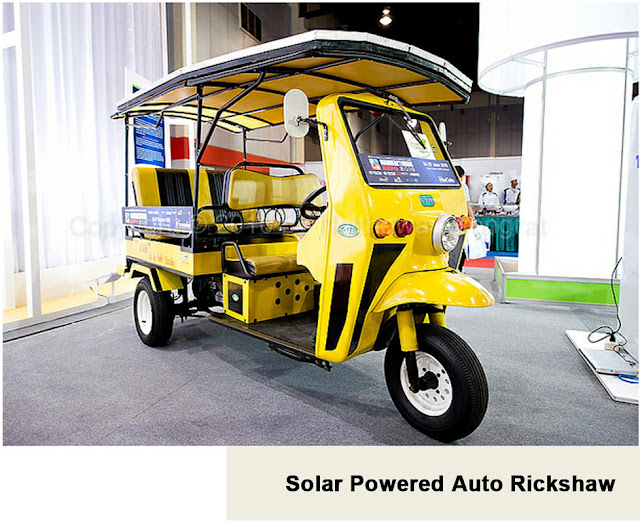 In Bangkok, Auto Rickshaws, better known as “tuk-tuks” are often regarded as unique symbol of Thailand. Just like in our countries conventional auto, the tricycles, this are widely used urban transport. However, conventionally fueled tuk-tuks are polluting so Air Marshal Morakot Charnsomruad has designed a cleaner, greener tuk-tuk vehicle that has zero-emisson, that is powered by solar energy. The designer hopes that eventually the government would subsidies so that this solar powered tuk-tuks would be more affordable.

We may not have solar powered tricycles yet but The Philippines semiconductor and electronics industry are working closely with local universities, industries and investors that may offer significant opportunities for innovation particularly in solar energy applications development and manufacturing-process. According to Solaria’s Funcell, Filipino engineers have made improvement in solar cell manufacturing process. Companies like SunPower and Solaria can be used as presence by Filipinos to attract key suppliers.  “In order to replicate that success for the solar industry and create an efficient 'local Solar Valley,' the Philippines would need a solid infrastructure with an ecosystem of supply-chain support," says Funcell.

Here is a video of Solar maintenance in the Philippines:

Since we live in a very sunny country, it would be an advantage for us Filipinos. But why aren’t these things being advertised by the government or being implemented wherein Filipinos should already try using solar powered items? If you read the comments below the video on youtube you will see how this solar panels are not really that hard to maintain since you only have to clean it to maintain usage and you don't have to pay for any chargers like electricity or etc. Though what they are talking about here the video may be how it would be hard for the poor to purchase this solar panel because they are costly. If only the government could help and support this technology can we really benefit from using alternate solar energy.